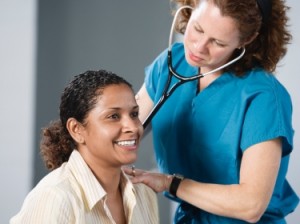 Although these studies were not intended to evaluate standards of care, it is a reasonable assumption that successful implementation of an asthma education program in one of these deprived neighborhoods would not only be hampered by a lack of health-care infrastructure but also by the fact that optimal asthma control is likely to require regular antiinflammatory therapy that is more expensive than bronchodilator therapy. Although a societal perspective might find the regular use of anti-inflammatory therapy cost-effective, the patient faced with the purchase of an expensive anti-inflammatory therapy may not be able to surmount the immediate financial barrier. Even with appropriate education, an awareness of possible benefits may not translate into regular use.
Although not specifically designed to address recruitment into an asthma education program, a study from New Zealand highlights the socioeconomic barriers to attendance at an asthma clinic. In this study, McClellan and Garrett evaluated 138 patients attending an asthma clinic further birth control online. They divided patients into low attenders and high attenders depending on the number of appointments kept. Ethnicity, age/ethnicity, and socioeconomic status were the only significant discriminators between high and low attenders. When reasons for failure to attend were examined, difficulty getting time off work as well as travel costs were among the reasons cited by patients. Whether these perceived problems constitute the greatest barriers to attendance or whether other, unreported barriers are of greater concern would require further study. These data again highlight that subjects eligible for asthma education may well have significant socioeconomic barriers to attendance at such programs.
In a separate study, the same investigators reported the employment experience of 93 consecutive patients with asthma. Repeated hospital admissions and frequent asthma-related work absenteeism were found to correlate with a feeling of discrimination, loss of work, and lack of promotion in one’s job. The vast majority of subjects had not told their employers of the diagnosis of asthma and 32% of those employed had difficulty getting time off work to attend their clinic appointment. A minority of those unemployed (22.9%) were receiving disability compensation and 8.3% had lost their jobs because of asthma. Thus, whether employed or not, subjects with asthma face significant socioeconomic barriers and stigma due to the chronic and disabling nature of asthma, especially if not treated properly.