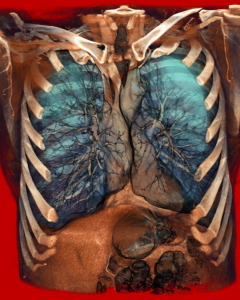 Part 2 of this study investigated the responsiveness of the 2MWT as a measure of change following a 5-week pulmonary rehabilitation program. Of the 15 subjects recruited to this program, 3 subjects dropped out due to poor motivation and 3 subjects failed the postassessment review due to acute exacerbations. Therefore, data from nine subjects (mean age, 74 ± 8.7 years; mean FEV1, 0.94 ± 0.29 L and 42.4 ± 12.1% predicted) were used in the analysis (Table 5). There were significant improvements in both the 2MWT and 6MWT after pulmonary rehabilitation (2MWT, 17.2 ± 13.8 m; 6MWT, 60.6 ± 35.5 m; p < 0.01). Moderate effect sizes were found for both the 2MWT and 6MWT. The effect size of the 2MWT was larger than that of the 6MWT. Large responsiveness to pulmonary rehabilitation was found for both the 2MWT and the 6MWT, as indicated by the standardized mean responses (2MWT, 1.25; 6MWT, 1.70). A correlation analysis between the mean changes of the 2MWT and 6MWT showed a high correlation coefficient (r = 0.70; p < 0.05), which indicated that the external responsiveness of the 2MWT was good.

Reliability is a fundamental measurement property that is relatively easy to determine, and is quantified in terms of the degree of consistency and repeatability when properly administered under similar circumstances for a specific population. This study demonstrated that with this group of COPD patients, the distance walked in the three trials in 2MWTs was highly reproducible. This was different from the results of other studies’ in which there were significant improvements in subsequent trials. In the study of Larson et al, the improvements were probably due to learning effects as subjects remembered their performance and were encouraged through external cues such as “try harder” on subsequence tests. It is known that motor learning occurred as a result of practice and experience with a task, resulting in a relatively permanent increase in proficiency at the task. However, in this study, the learning effect was minimized as a practice walk was given before the actual tests were conducted and the testing procedures were standardized.
In the study by O’Reilly et al, there was a significant mean variation of 9.1% in walking distance when tests were performed 2 weeks apart. In the study by Eiser et al, significant differences in mean walking distance were found among trials conducted on 3 days of consecutive weeks. The difference may have been caused by the changes in airway condition in these COPD patients, as day-to-day variability in spirometry results was present even in stable COPD patients.2 In this study, there was only very small variation across the trials as the effect caused by lung function variability was minimized since the different trials were conducted on the same day during a 1.5-h test period.

Table 5—2MWT and 6MWT Before and After Rehabilitation