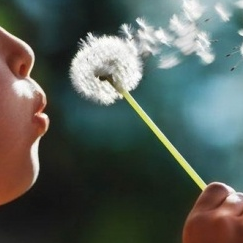 The overall fifth percentile of PD20FEV, (8.3 (imol) and the FEV,-specific fifth percentiles of PD20FEV, (as indicated in Table 2) respectively defined the 26 (4.8 percent) and 27 (4.9 percent) most responsive subjects among the 547 asymptomatic men. Seventeen (3.1 percent) men were classified as hyperresponders by both approaches, but 19 (3.5 percent) men were classified differently by these alternative definitions of hyperresponsiveness.
These alternative definitions of hyperresponsiveness were compared in terms of sensitivity and specificity for detecting questionnaire-reported asthma and wheezing among all 838 subjects with normal FEV, and FEV,/FVC ratio. There was no appreciable difference in sensitivity and specificity between using the overall fifth percentile as opposed to the FEV,-spe-cific fifth percentiles as the lower limit of normal PD20FEV, (Table 3). A parallel analysis, which is not shown, used definitions of hyperresponsiveness based on the tenth rather than fifth percentile of PD20FEV, and led to the same conclusion: FEV,-specific lower limits of normal PD20FEV, provided no greater sensitivity and specificity for detecting asthma and wheezing than did a single lower limit of normal PD20FEV, for all subjects.
We observed that methacholine PD20FEV, was positively correlated with prechallenge FEV, in a sample of middle-aged and elderly men who denied respiratory symptoms or illnesses and who had normal prechallenge spirometry. When these healthy subjects were grouped into quintiles according to prechallenge FEV,, the lower limit of normal PD20FEV,, defined arbitrarily as the fifth percentile of PD20FEV,, varied across quintiles. When applied to the overall sample, which included men with respiratory disease, the use of FEV,-specific cut-off values to separate “normal” from “abnormal” PD20FEV, did not improve the sensitivity or specificity of methacholine challenge as a test for questionnaire-reported asthma or wheezing. 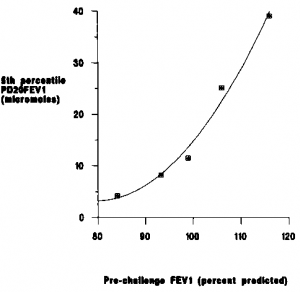