The results of the MRI studies agreed with the findings from the pulmonary arteriograms in all four patients who underwent both studies (Fig 1). The patient with Osler-Weber-Rendu syndrome had a 1-cm nodular region of gray signal in the left upper lobe detected on the spin-echo sequences, but, because of fatigue, refused to have this region analyzed with the GRE cine and PC cine sequences after the right lower lobe arteriovenous fistula was evaluated. This left upper left lobe region was another vascular malformation as determined by superselective pulmonary angiography. natural asthma inhaler

The MRI criteria to diagnose PVMs were not met in three patients. The first patient had a nodular opacity with a questionable feeding vessel in the right middle lobe on a CT scan. The lesion was relatively bright on an intermediate weighted spin-echo sequence and definitely did not meet our criteria on the GRE images. Thus, this lesion was diagnosed as a nonvascular nodule by imaging and was pathologically proved to be an adenocarcinoma.
The second patient was a 19-year-old man referred because of a bruit in the left lower lung zone. The CT scan showed a peripheral nodular opacity in the left lower lobe with a possible feeding and draining vessel. MRI revealed a nodular lesion that was relatively bright on the more Ti-weighted and T2-weighted gated spin-echo images. The lesion was also bright on the GRE cine sequence; however, no intralesion flow was detected on the PC cine sequence, and therefore this lesion was interpreted as nonvascular. A follow-up CT scan failed to showed the lesion in the left lower lobe, and it was presumed to be a region of mucus plugging and/or atelectasis. The third patient was a 29-year-old asymptomatic man with an abnormality in the right middle lobe detected on a routine chest radiograph. The CT scan showed a tubular lesion in the right middle lobe, raising the possibility of a PVM (Fig 2, top). The relatively Ti-weighted spin-echo images showed moderately bright gray signal intensity within the tubular lesion (Fig 2, bottom). 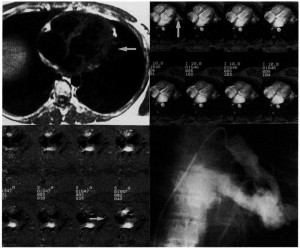 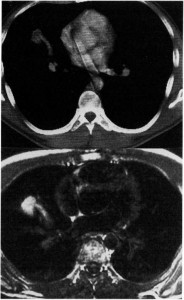