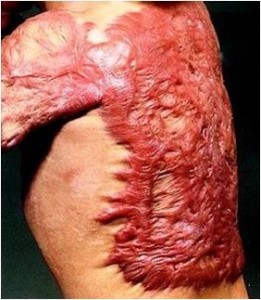 The GRE cine images revealed the lesion to be bright (Fig 3, left). The PC cine sequence did not show flow within the lesion (Fig 3, left); hence, the lesion was interpreted as solid with postobstructive mucus, atelectasis, and/or blood. As this was one of the first cases using the PC cine sequence to evaluate PVMs at our institution, the patient underwent pulmonary arteriography that failed to show a vascular lesion (Fig 3, right). The patient underwent surgery that revealed an endobronchial carcinoid with distal partial obstruction and hemorrhage.
A relatively low velocity range of 25 cm/s (to cover the expected velocities) was chosen for one patient who had a right middle lobe lesion suspicious for a PVM by CT. Aliasing was present on the PC cine images, but the study was still diagnostic for a PVM. No patient with a pulmonary artery aneurysm or pulmonary varix was discovered. The remaining cases that were interpreted as PVM using these MRI criteria are, by definition, presumed diagnoses.
Magnetic resonance imaging should be able to diagnose PVM in an accurate, noninvasive manner. Applying the MRI criteria to diagnose PVM set forth in this study yielded an accurate diagnosis in all cases. buy ventolin inhaler

Pulmonary AVM occurs in about 15 percent of patients with Osler-Weber-Rendu syndrome. These patients comprise about one third of all patients with pulmonary AVM. Pulmonary AVMs are multiple in about one third of patients and bilateral in about 8 percent. Thus, a clinically efficacious noninvasive imaging modality must be able to diagnose accurately multiple lesions; this modality must also be able to visualize all lesions greater than 2 cm, as pulmonary AVMs less than or equal to 2 cm in size usually do not lead to symptoms such as cerebral vascular accidents or cerebral abscesses from paradoxical emboli, dyspnea on exertion, hemoptysis, or hypoxemia. Nevertheless, it is important to detect and follow small pulmonary AVMs, for they tend to enlarge over time. Clearly, an accurate, noninvasive imaging modality is needed for these follow-up studies, and we believe that MRI using the criteria detailed in this report afford this ability. 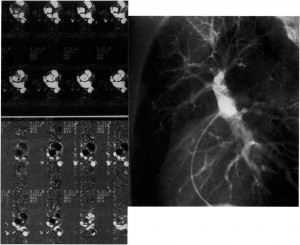 Figure 3. Left: The axial GRE cine sequence at the same location demonstrates slightly bright signal within the right middle lobe lesion, though not as bright as the blood within the visualized cardiac chambers and vessels; the corresponding axial PC cine sequence demonstrates no flow within the lesion. Thus, the lesion was interpreted as nonvascular. Right: The corresponding right pulmonary arteriogram demonstrates no vascular lesion. At surgery, an endobronchial carcinoid with distal partial obstruction and hemorrhage was discovered.