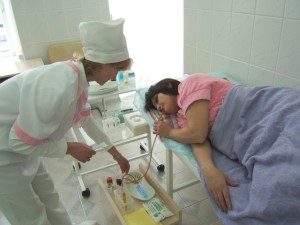 Tables 2, 3 display the demographic description of the study population. The means and SEs for the demographic variables (age, height, and weight) and years in the grain industry are presented in Table 2. Grain workers in the Central region were the youngest in all the cycles. Age increased approximately 3 years only for the St. Lawrence and the Mountain regions between cycle 3 and cycle 4 and for the Central region between cycle 2 and cycle 3. For other regions, between any two consecutive cycles, the mean age either increased or decreased by > 3 years, indicating that workers were entering and leaving the industry. St. Lawrence workers were shorter in height and lighter in weight compared to the grain workers in other regions. Table 3 shows the maximum proportion of current smokers (60.8% at cycle 1) were in the St. Lawrence region, which declined to 26% by cycle 5.

When stratified by cycle, the prevalence of chronic respiratory symptoms reveals a possible trend over time with a maximum prevalence in cycle 2 and minimum in cycle 5, except for chronic wheeze, which had minimum prevalence in cycle 4 (Table 4). The prevalence of chronic respiratory symptoms in five cycles declined after dust control. In 1987, the occupational exposure limit of 10 mg/m on existing facilities was recommended and new facilities or remodeled facilities were required to achieve an exposure limit of 5 mg/m. Seventy percent of grain terminals/elevators had achieved dust control by 1986. It was reported that approximately 80% of all dust level measurements made during the grain dust medical surveillance program until 1986 were < 10 mg/m, and 60% of all dust level measurements were < 5 mg/m. Based on this information, the results in Table 5 are presented based on before and after dust control. The most common reported symptom was chronic cough (27.8%) among St. Lawrence grain workers followed by chronic sputum (20.9%) before dust control.

Table 2—Descriptive Statistics of Demographic Variables, Years in the Industry, and Lung Function Values Stratified by Region and Cycle