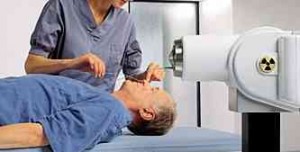 Of the 32 patients studied, 16 were alive at the time of this evaluation. Two of these patients were subsequently diagnosed and treated for metastasis to the brain, and one was diagnosed and treated for a spinal cord compression. The median follow-up after brachytherapy was 9.3 months, with a range from 6 to 24 months. Twelve patients were dead, one of whom, with a history of severe cardiac arrhythmias, had died 6 weeks after her last brachytherapy procedure. Four patients died of distant metastasis without evidence of local failure. The median survival as determined from the time of diagnosis was 17.7 months for group 1 and 7.5 months for group 2.
Subjective improvement with complete symptomatic response was attained in 15 of those 15 patients presenting with hemoptysis. All ten patients with dyspnea had significant reduction of shortness of breath. Of seven patients with unremitting cough, six had diminishment of frequency and intensity by greater than 50 percent. The duration of response to treatment was maintained for at least the first 6 months of the follow-up period in 15 of 17 (88 percent) of the patients in group 1 and 70 percent of group 2. cialis canadian pharmacy

The ECOG PS scale was used and found to be a useful parameter to show how patients benefited from endobronchial irradiation. The values for the ECOG PS before and 1 month after treatment are shown in Table 1. As demonstrated in Table 1, there were no patients whose PS deteriorated during or up to 1 month after treatments. Prior to endobronchial treatment, 14 patients had a PS that indicated severe disability, as characterized by an inability to ambulate, carry on self-care, or work. Following treatment, a shift to a more favorable score, with an improvement in both the ability for self-care and the ability to ambulate, was noted in 11 patients. In seven patients, this improvement lead to a full ability to carry on all activities of their status before disease. In 10 of 32 patients (5 in group 1 and 5 in group 2), follow-up endoscopy was performed and revealed a complete response. Tumors which were initially characterized as obstructing and exophytic generally responded with prompt regression after the first treatment. Significant tumor regression of up to 80 percent, based on direct measurement of the tumor at bronchoscopy or by reexamination of CT scans, was noted following the first 2 treatments. In all patients, by the final application, bronchoscopic examination revealed complete tumoral resolution with only a mucosal reaction evident. There was confirmation of these complete responses in all patients. In these ten individuals, negative results from biopsies, or bronchial washings (or both) were obtained. Routine follow-up chest x-ray films revealed a 44 percent radiographic improvement, with resolution of previously documented tumor, infiltrate, or atelectasis. Figure 2 shows chest roentgenograms from before and 8 months after irradiation in a patient who received external irradiation and fractionated endobronchial irradiation. Treatment was tolerated well, with minimal acute or late complications. It was necessary to abandon one procedure secondary to bleeding during the initial bronchoscopy. Two additional patients needed extended observation for cardiac abnormalities. There were no differences in the rate of complications between the two groups. Patients who were treated for recurrent disease fared as well as those presenting for primary treatment with regard to complication rates. One patient treated in group 1 has persistent cough requiring conservative treatment. There was no association between the location of recurrence and the incidence of complications. No hemorrhage or fistula formation was evident.
Local control, defined as no radiographic or clinical evidence of progression for at least 6 months after brachytherapy, was obtained in 15 of 17 (88 percent) of the patients in group 1 and in 70 percent of the patients in group 2. The median follow-up period of the 2 groups was 14.5 and 8 months, respectively. Table 2 shows the results of treatment in both groups.

Table 1—Response to Endobronchial Treatment Through Change in ECOG PS