Because some subjects met criteria for EIA with placebo exercise (“responders”) and some did not (“nonresponders”), we analyzed the data separately to see if the mask improved lung function in the seven nonresponders. For responders, the mean declines in FEV1 during placebo and active device exercise were 34% and 8%, respectively (p = 0.02). For nonresponders, the mean declines in FEV1 for placebo and active device exercise were 6.8% and 1.5%, respectively (p = 0.006). Therefore, this subgroup analysis shows that the mask device significantly improves lung function whether or not subjects have EIA with placebo exercise.
In study 2, five subjects with documented EIA participated in three cold air exercise tests. Again, there were indications that the heat exchanger mask prevented a decline in lung function, although results did not quite achieve statistical significance. The mean fall in FEV1 was 28 ± 10% with placebo and 6.3 ± 3.9% with the active device (p = 0.0625, Fig 3). The mean fall in FEF25-75 was 36 ± 11% with placebo and 10 ± 4.8% with the active device (p = 0.0625). With albuterol, the mean fall in FEVj and FEF25-75 was 11 ± 3.7% and 23 ± 6.0%, respectively. While there was no difference in the change in FEV1 between the mask and albuterol exercises (p = 0.4375), the mask performed better than albuterol with respect to the decline in FEF25-75 (p = 0.0625). Correcting for lung volume, the FEF25-75/FVC fell only 6.2 ± 3.0% with the mask, compared to 19 ± 5.9% with albuterol pretreatment, a finding that also approached statistical significance (p = 0.125). As in the first study, two of the five subjects required early albuterol rescue after the placebo exercise due to a marked decline in FEV1. This did not occur with the mask or albuterol pretreatment exercises. Here 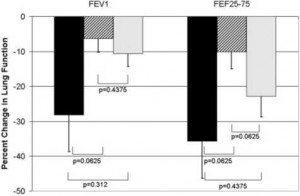