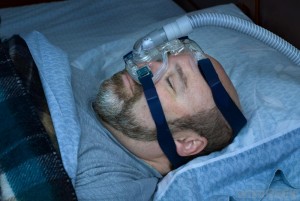 Spirometry was performed at 5, 15, and 30 min after exercise, and subjects were rescued with albuterol if they demonstrated a > 40% decline in FEV1 at any time.
The primary outcome for both studies was the maximum postexercise percentage decline in FEV1. Secondary outcomes included the percentage decline in maximum mid-expiratory flow (FEF25-75), FEF25-75/FVC ratio, and for study 1, the presence or absence of EIA as defined by a decline in FEV1 > 10%. The maximal percentage decrease in lung function was expressed as a mean ± SE. Data from two exercise visits within a study were compared by applying the Wilcoxon signed-rank test to the percentage of maximal decline in lung function. In study 1, the McNemar test was used to compare placebo and active device exercises with respect to the presence of EIA. so 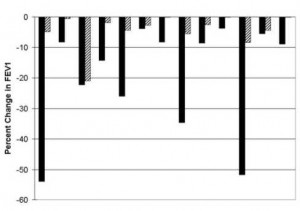