Exclusion criteria included the presence of other lung diseases, use of systemic or inhaled glucocorticoids within 6 weeks, use of leukotriene inhibitors within 4 weeks, and symptoms of upper or lower respiratory tract infection within 6 weeks. Study 1 subjects participated in three visits. At visit one, spirometry and methacholine challenge were performed. Visits two and three each consisted of a cold air exercise test while wearing the PRHE mask either with the active device or a placebo insert. These two trials were performed 3 to 7 days apart, at approximately 9 am to maximize consistency and reproducibility. Subjects were required to withhold short-acting bronchodilators for 6 h, long-acting bronchodilators for 24 h, and antihistamines for 24 h before each visit. A single-blind randomization (using a random number generator) was used to determine the testing order for each individual. Subjects exercised on a treadmill while inhaling chilled medical-grade room air at — 25 to – 15°C.

Chilled air was generated from the adiabatic expansion of compressed medical-grade ambient air through a throttle valve (Fig 1). Upstream pressure was adjusted to achieve the desired temperature drop downstream using an in-line continuous digital readout temperature probe, with the measurement taken between the exterior of the mask and the throttle valve outlet. After increasing work to achieve 85% of maximal predicted heart rate, exercise was continued at that heart rate for an additional 10 min. Spirometry was performed at 5, 15, and 30 min after exercise. If there was a > 40% drop in FEV1 at any time, the patient was immediately rescued with four puffs of albuterol. this

A second study was designed to compare the mask to the standard therapy for EIA (albuterol pretreatment). In study 2, five subjects with documented EIA (as defined as a postexercise decline in FEV1 > 10%)n were recruited under the same inclusion and exclusion criteria as above, with the exception that inhaled corticosteroids were allowed as long as subjects continued to demonstrate EIA on this regimen. After an initial history and physical examination, the subjects completed three cold air exercise tests separated by at least 3 days. For the first test, the PRHE mask was worn with exercise in cold air, exactly as in the initial study (mask exercise). For the second test, subjects were pretreated with two puffs of albuterol, and exercised in cold air without the mask (albuterol exercise). For the third test, subjects exercised in cold air without albuterol pretreatment or the mask (unprotected exercise). 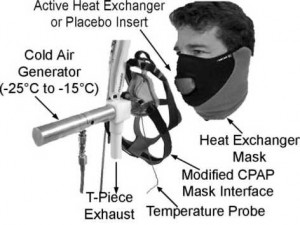 Figure 1. Cold air testing apparatus. Cold air is produced by an expansion valve and delivered to the front of the mask through an overlying continuous positive airway pressure (CPAP) mask. Inhaled air temperature is measured at the front of the heat exchanger mask.