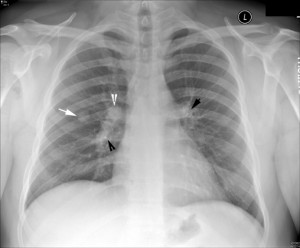 Thirty subjects who had solitary pulmonary nodules up to 3 cm in size were analyzed. Demographic and clinical data are listed in Table 1. There were 22 men and 8 women with a mean age of 65.3 years (range, 38 to 89 years). Overall, 20 patients had malignant nodules and 10 had benign nodules.
Size of Solitary Pulmonary Nodule
All benign nodules were less than 2.5 cm and 9 of 10 benign nodules were less than 2 cm. Overall, 25 of the 30 nodules were less than 2 cm in size.
Six patients had a history of previous malignancy. Two patients had metastatic melanoma, and one patient with previously resected squamous cell carcinoma was found to have a second primary in the lung. Two patients had carcinoma of the breast resected several years earlier, and both were found to have a primary lung cancer. One patient had a history of carcinoma of the prostate, but the pulmonary nodule was a benign necrotizing granuloma.
Correlation of clinical, histologic, and PET imaging results in 30 patients with solitary pulmonary nodules is shown in Table 2. Histologic specimens were obtained in 29 patients. Twenty patients had thoracotomy, eight had transthoracic fine needle aspiration biopsy, and one had bronchoscopy. One patient who did not have tissue confirmation had a stable solitary pulmonary nodule over 3 years.
PET-FDG Imaging
PET imaging correctly identified malignancy in 19 of 20 patients with malignant pulmonary nodules (adenocarcinoma, 12; squamous cell carcinoma, 2; non-small-cell carcinoma, 2; small-cell carcinoma, 2; and melanoma, 2). PET-FDG uptake was not increased in one patient with a 1-cm solitary pulmonary nodule and thoracotomy identified scar adenocarcinoma.
PET imaging correctly identified eight of ten benign nodules. Histologic specimens were obtained by thoracotomy in eight of ten patients with benign nodules that demonstrated the following: histoplasmosis, 3; granuloma, 2; hamartoma, 1; carcinoid, 1; organizing pneumonia, 1. The histology of carcinoid was benign and was thus included under benign nodules. There were two false-positive cases and both had caseating granulomas with active inflammation and Histoplasma organisms. One patient who had normal findings on bronchoscopy showing nonspecific inflammation had a stable solitary pulmonary nodule over 2 years.
The DUR values ranged from 1.67 to 11.77 (mean±SD, 5.55±2.79) for malignant nodules and were significantly greater than benign nodules (mean ± SD, 0.95 ± 0.99) (p<0.001). The DUR indices were greater than 2 for all true-positive cases and were less than 1 for all true-negative cases. Two false-positive cases had DURs of 1.92 and 3.38, and one false-negative case had a DUR of 1.67 (Table 2).
Overall, PET imaging correctly identified 27 of 30 solitary pulmonary nodules. Diagnostic accuracy was high with sensitivity of 95 percent and specificity of 80 percent. The positive and negative predictive values of PET imaging for detecting malignancy in solitary pulmonary nodules were 90 percent and 89 percent, respectively.