Patient Selection
Thirty subjects who presented for evaluation of solitary pulmonary nodules of 3 cm or less were enrolled in this study. Subjects were evaluated at Creighton University Medical Center and the Veterans Affairs Medical Center in Omaha. All patients had plain chest radiographs, and CT scan of the chest and mediastinum was obtained in 25 patients. With the exception of one patient who had eccentric calcification, all solitary pulmonary nodules were noncalcified and were judged to be indeterminate on the basis of chest radiograph and CT scan. Final diagnosis was established by obtaining tissue either by thoracotomy, transthoracic fine needle aspiration biopsy, or bronchoscopy. The study was approved by the Institutional Review Board at Creighton University, and all patients gave informed consent.
PET Imaging
The PET imaging of the entire chest region was performed using the methodology as previously described.1S Briefly, PET images were obtained with a scanner (Siemens-CTI-ECAT Scanner 931/08/ 16, Siemens Medical Systems, Iselin, NJ; CTI, Knoxville, Tenn) that produces 15 slices of 8-mm thickness and has a reconstructed in-plane resolution of approximately 5 to 7 mm. PET imaging was performed 1 h after intravenous administration of 10 mCi of F-18-FDG. Transmission scans were obtained in all patients before FDG administration, for attenuation correction of emission data. Acquisition was done over 10 to 15 min to obtain a minimum of 10 million counts per direct plane and a total of 220 million counts. Patients were carefully repositioned by using skin marking to ensure an identical field of view for emission and transmission scanning. The transaxial images were reconstructed into transaxial, coronal, and sagittal views. Qualitative analysis of the images was performed by visual identification of areas of increased FDG uptake in both lung fields. The most important feature looked for was the appearance of a relatively bright area within the confines of the lung nodule (Fig 1). The images were also superimposed over transmission images for anatomic correlation. The PET images were interpreted blindly by two experienced nuclear medicine physicians separately with good agreement between the two observers.
The semiquantitative index, differential uptake ratio (DUR), was also computed for all patients by drawing a region of interest over the solitary pulmonary nodule on the transaxial images. These calculations relate activity found in tissue to the dose injected and the patients mass. Radiotracer PET counts were also corrected for radioactive decay from the time of injection. Small circular regions consisting of 12 pixels (0.8 cm2) were drawn over the area of the pulmonary nodule that showed the most intense FDG uptake. In some cases, where the nodule could not be identified on the PET or transmission scan because of decreased or absent FDG uptake, the region of interest was drawn in its location as extrapolated from the chest radiograph and CT scan. The DUR was then computed as follows: Mean PET counts/pixel/s X calibration factor Injected dose (mCi)/body weight (kg) where the calibration factor=(microcuries/ml)/(counts/pixel/s) 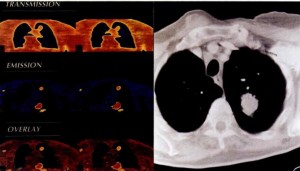