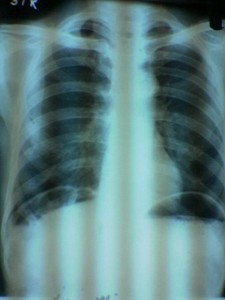 Continuous BP measurements were obtained noninvasively with a wrist mounted arterial tonometer (NCAT; Nellcor; Pleasanton, CA). The analog output of this device was digitized via an eight-bit analog-to-digital converter (DAQ-500; National Instruments; Austin, TX) [Fig 1]. The sampling rate was 200 Hz. A peak-seeking periodic amplitude analysis algorithm was designed (LabVIEW; National Instruments) that would identify local maxima of the BP from the data stream. Beat-to-beat systolic BP (SBP) was identified using the algorithm recursively. Finally, the algorithm was applied again to the beat-to-beat SBP data to determine the variation in SBP with respiration. The algorithm calculates PP by keeping a moving average of the last five peak SBPs and an average of the last five trough SBPs. PP is then calculated by subtracting the average trough SBP from the average peak SBP. Since the algorithm is able to monitor the maxima and minima of SBP within a respiratory cycle, a derivation of respiratory rate was performed by measuring the elapsed time for the five SBPs.
Accuracy of PP and Physician Scoring in Prediction of Admission Disposition: Using the hospital discharge and admission/ relapse results as the “gold standard,” the sensitivity, specificity, and positive and negative predictive values of AT-PP and physician scoring were calculated. The exact binomial confidence intervals (CIs) were computed for each estimate. The measure of agreement between physician-determined and AT-PP-deter-mined disposition was computed from the Cohen к-statistic. All analyses were conducted with a statistical software package (SAS, version 9.1 [the freely distributed “intracc” SAS macro]; SAS Institute; Cary, NC), and custom functions were developed internally (for MatLab, version 7.01; The MathWorks; Natick, MA); an а-level of 0.05 was deemed to be statistically significant unless otherwise noted. In addition, receiver operating characteristic (ROC) curves were constructed for AT-PP as a continuous variable for the prediction of hospital admission status using pretreatment and posttreatment values. The area under the curve (AUC) and 95% CI was computed as the c-statistic by the method of DeLong et al in estimating the overall ability of PP to distinguish between patients who were admitted to the hospital/ relapsed and those who were discharged from the hospital. An optimized cutoff AT-PP threshold was selected based on optimized sensitivity and specificity, where sensitivity and specificity were equal. 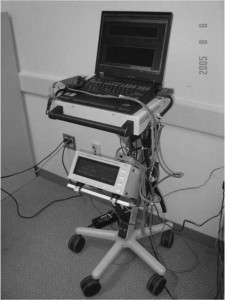 Figure 1. Photograph of a PP monitor setup consisting of a laptop computer equipped with an analog-to-digital conversion interface and a continuous noninvasive BP monitor.