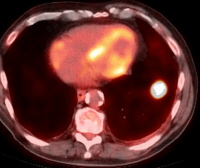 CT detected mediastinal and/or hilar lymph nodes in all of the patients enrolled in the study. In particular, enlarged lymph nodes (short axis > 10 mm) were seen in 92 mediastinal and hilar lymph nodes in 54 patients (52.9%) [Table 2]. However, 34 patients did not have lymph node involvement and were recorded as false positives based on tissue sampling and clinical course (Table 3). The medium size of the lymph node was 12.7 mm for the long axis and 8.7 mm for the short axis on CT (Table 1). There were only six false-negative findings among the 48 patients who presented with lymph nodes < 1 cm in short axis (Table 3). As a result, the sensitivity, specificity, positive predictive value, negative predicted value, and accuracy of CT in the prediction of mediastinal lymph node staging were 76.9%, 55.3%, 37.0%, 87.5%, and 60.8%, respectively (Table 4). read only
PET identified 89 hot spots in 43 patients (42.2%), which are shown in Table 2. Twenty-two patients had multiple uptakes in the mediastinal lymph nodes, while 21 patients only had single-site abnormality. One patient had single-station abnormal metabolic activity in the supra clavicular lymph node that was not evident on CT. Of the 43 PET-positive cases, 23 patients had false-positive findings based on histology and clinical follow-up (Table 3, Fig 1). The sensitivity, specificity, positive predictive value, negative predicted value, and accuracy of PET in the prediction of mediastinal lymph node staging were 80.0%, 70.1%, 46.5%, 91.5%, and 72.5%, respectively (Table 4).
EBUS-TBNA was performed in all 102 patients. The targeted lymph nodes are shown in Table 1. There were more right-sided paratracheal lymph nodes. In all, 147 mediastinal lymph nodes as well as 53 hilar lymph nodes were punctured. A firm diagnosis from cytology was obtained in all of the lymph nodes punctured. In 24 of 26 patients with mediastinal lymph node metastasis, EBUS-TBNA correctly diagnosed malignancy prior to surgery (92.3%) [Table 3]. The two patients with false-negative findings on EBUS-TBNA had N2 disease proven by complete lymphadenectomy. One of the two cases with false-negative findings is shown in Figure 3. This patient had adenocarcinoma in the right lower lobe with metastasis in the subcarinal lymph node that was 15 X 8 mm in diameter on CT with calcification (Fig 3, top, A). This lymph node was negative for malignancy on PET as well. EBUS images also detected calcification within the node (Fig 3, center, B).

Table 3—Comparison of CT, PET, and EBUS-TBNA to the Final Diagnosis

Table 4—Characteristics of CT, PET, and EBUS-TBNA in the Correct Prediction of Mediastinal Lymph Node Staging