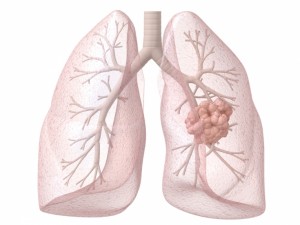 EBUS-TBNA was performed with a flexible ultrasonic puncture bronchoscope with a linear scanning transducer with a frequency of 7.5 MHz on the tip (CP-EBUS; XBF-UC260F-OL8; Olympus; Tokyo, Japan) as previously described. It scans parallel to the insertion direction of the bronchoscope and is connected to a dedicated ultrasound scanner (EU-C2000; Olympus) with Doppler-flow imaging for the detection of blood vessels. All procedures were performed by the same operator (K.Y.) under conscious sedation (midazolam). itat on
Prior to EBUS-TBNA, a CT scan of the chest and a written report of the FDG-PET scan were available. The examination of all mediastinal lymph node stations accessible by CP-EBUS (stations 1, 2, 4, and 7) as well as the hilar lymph nodes (stations 10 and 11) was performed. After introduction, the bronchoscope was advanced into the main bronchus, and the hilar lymph nodes were observed. The subcarinal lymph nodes followed by lower paratracheal, upper paratracheal, and finally the highest mediastinal lymph nodes were visualized. For all lymph nodes visualized, frozen ultrasound images were obtained, and the sizes of the lymph nodes were measured in two dimensions by the placement of cursors. Lymph nodes with the short diameter > 5 mm were sampled with a dedicated 22-gauge TBNA needle (NA-201SX-4022; Olympus) under direct EBUS guidance.

Different needles were used for each lymph node station; whenever N3 nodes were visualized, they were sampled first before N2 nodes. N1 nodes were punctured after N2 nodes. In addition, an internal sheath equipped with a needle that is withdrawn after passing the bronchial wall was used to avoid contamination during TBNA. The aspirated material was smeared onto glass slides. Smears were air dried as well as fixed in 95% alcohol. Dried smears were stained using Diff-Quik stain (American Scientific Products; McGaw Park, IL) and evaluated by an on-site cytopathologist to confirm adequate cell material. If adequate tissue was not identified by on site cytology after five passes, the procedure was terminated. Furthermore, Papanicolaou staining and light microscopy were performed by an independent cytopathologist who was blinded to the details of the cases. Specimens were categorized as positive (tumor cells), negative (lymphoid but no tumor cells), or inconclusive (poor cellularity). A representative case of a patient who underwent FDG-PET, CT, and EBUS-TBNA prior to surgery is shown in Figure 1 and Figure 2. Based on final surgical/pathologic diagnosis, CT and PET scan findings were false positive, while EBUS-TBNA result was true negative. 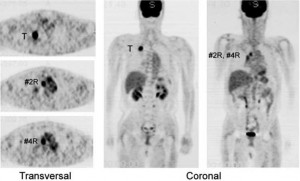 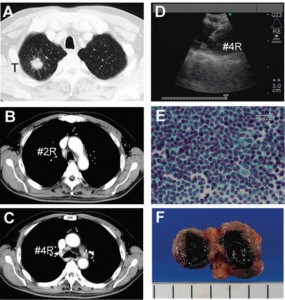