All the experiments were conducted in a well-isolated room. Recording devices were set up as in Figure 1. Oxygen saturation (Sa02) was monitored by a pulse oximeter (Ohmeda Biox 3700, Englewood, Colo). End-tidal CO, (etC02) was monitored continuously via a nasal cannula (during iron lung ventilation) or a small tube attached to the nasal mask (during BiPAP ventilation), which was connected to an end-tidal C02 monitor (Ohmeda 5200). Electrocardiogram electrodes were placed on the anterior part of the chest. Diaphragmatic electromyogram (EMGdi) was measured via bipolar surface electrodes placed in the right sixth and seventh intercostal spaces. The EMG of the sternocleidomastoid muscle (EMGst) was measured by surface electrodes positioned over the right muscle midpoint. The position of electrodes was adjusted to obtain an optimal and reproducible signal-to-noise ratio during deep and normal inspiration. The EMG signal was amplified and filtered using a high-gain bioamplifier with band pass filter (8 to 1,000 Hz, Coulbourn S75-01). The respiratory motions of rib cage (RC), abdomen (AB), and their sum were measured by respiratory inductive plethysmography (Respigraph, Respitrace Corporation, Miami Beach, Fla). Two recording bands were placed around the middle RC, ie, 10 cm above xyphoid process, and around the AB just above the umbilical line, respectively.
The signals from the etCOz monitor, pressure transducer, respiratory inductive plethysmography, ECG, and EMG amplifier/filters passed through an analog to digital converter (Coulbourn L25-12) to a personal computer. With the help of software (CODAS, Coulbourn), the signals were displayed throughout the study and recorded for 1 min every 10 min. During recording, the same signals were simultaneously displayed and recorded on a strip chart recorder (Multi-Graphic Recording System, Coulbourn R14-18). Tidal volume (Vt) was measured using the sum signal from the respiratory inductive plethysmograph that was calibrated with a spirometer (Gould, Cleveland, Ohio) before study. Respiratory rate (RR) and inspiratory time (Ti) were calculated on a breath-bv-breath basis from the sum signal. 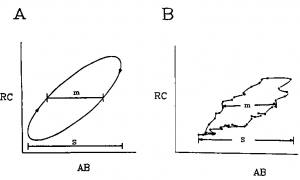 Figure 1. Rib cage (RC) and abdomen (AB) motion plotted against each other (with time as an implicit variable) in a Lissajous figure. The ratio of m/s is an index of thoracoabdominal asynchrony. For phase angle O<0<9O, sin 0 = m/s; For 9O<0<18O, 0=180 —p., where sin p, = m/s. Left (A)y The clockwise direction of the loop indicates that RC expansion precedes AB expansion during inspiration (from reference 21, with permission). Right (B), An example of the Lissajous figure from one breath of one of our patients.