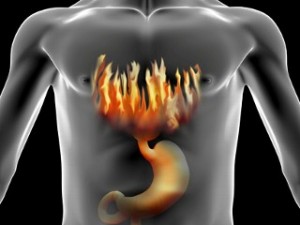 The origin of the terms gastroesophageal reflux (GER) and gastroesophageal reflux disease (GERD) is Latin. Reflux literally means backflow, coming from the two Latin words (re meaning “back,” plus fluere meaning “to flow”). It follows that GER is a term that refers to the backflow of stomach contents into the esophagus. Because GER episodes can occur up to 50 times a day, usually during meals and the postprandial state in healthy individuals, and not produce any symptoms, GER events can be physiologic in nature. On the other hand, GERD is a term that refers to a disease that is caused by GER manifested by either symptoms and/or tissue damage.
GERD is a term that encompasses a spectrum of common clinical manifestations from localized esophageal manifestations with typical and prominent GI symptoms, such as heartburn and regurgitation, to extraesophageal problems, such as cough or hoarseness, without any GI complaints. canadian neighbor pharmacy online

For example, in a population-based study in Olmsted County, MN, Locke et al, using a validated GER questionnaire, identified a prevalence rate of 59% for occasional episodes of GER-related symptoms such as heartburn, regurgitation, and dysphagia; 20% of the respondents reported weekly symptoms. In a prospective before-and-after intervention trial, Irwin et al found that when GERD was the cause of chronic cough, it could be silent from a GI standpoint up to 75% of the time. In a study in which the symptoms and findings of GERD were specifically sought and prospectively compared in otolaryngology and gastroenterology patients, Ossakow et al found that hoarseness was present in 100% of the otolaryngology patients and 0% of the gastroenterology patients, while heartburn was present in 89% of the gastroenterology patients and in only 6% of the otolaryngology patients. When otolaryngologists diagnose laryngeal or pharyngeal disease due to the backflow of stomach contents into the laryngopharynx, they refer to it as laryngopharyngeal reflux disease. It is now clear that the spectrum of clinical manifestations of GERD as evaluated by different specialists can vary.’’ It is also becoming increasingly more likely that the management of a variety of extraesophageal manifestations of GERD cannot only differ in clinical and diagnostic ways from the classic GERD seen by gastroenterologists, but also perhaps in pathogenetic and therapeutic aspects as well.