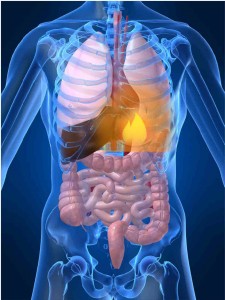 Aspiration syndromes associated with cough due to GERD include Mendelson syndrome, bacterial pneumonia and lung abscess, chemical pneumonitis, exogenous lipoid pneumonia, recurrent bacterial pneumonias, chronic interstitial fibrosis, bronchiectasis, Mycobacterium fortuitum or Mycobacterium chelonei pneumonia, diffuse aspiration bronchiolitis, and tracheobronchitis.
While the character and timing of cough are not predictive of when GERD is likely to be the cause of chronic cough, there is a clinical profile that has been highly predictive (approximately 91%) that the patient’s cough will respond to antireflux treatment, even when there are no GI complaints. This clinical profile, which appears in Table 1, was initially suggested by post hoc analyses of four prospective, before-and-after intervention studies of patients with chronic cough due to a variety of diseases, and was prospectively assessed in two small, before-and-after intervention studies, of patients with chronic cough due to GERD. In one of these prospective studies, cough disappeared in 12 of 12 patients receiving intensive medical therapy; in the other study, cough disappeared or significantly improved in 18 of 21 patients who had undergone antireflux surgery after they had not responded to intensive medical therapy. mycanadianpharmacy

The results of a prospective, before-and-after intervention trial have suggested that GERD cannot be excluded on clinical grounds as the potential cause of cough. This study suggested that there can be a dissociation in improvement in cough and GI complaints. Chronic cough due to GERD in some patients remained unchanged, while GI symptoms improved or disappeared with medical antireflux therapy. Moreover, because prior antireflux surgery failed to control GERD in some of the patients, perhaps for technical reasons, this study also suggested that it cannot be assumed that GERD has been definitively ruled out as a cause of cough because there is a history of prior antireflux surgery.