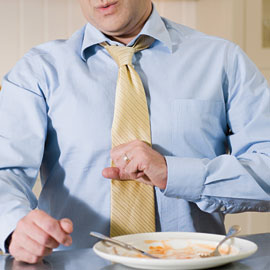 Last, 24-h esophageal pH monitoring, lung scintiscanning after intragastric 99mTc-sulfur colloid infusion, investigating for lipid-laden alveolar macrophages in induced sputum or BAL fluid and observing the gross appearance of airway mucosal surfaces during laryngoscopy and bronchoscopy, and lung biopsy have been utilized to link GER with a variety of pulmonary diseases as well as cough.
While tests that link GER with cough suggest a potential cause-effect relationship, a definitive diagnosis of cough due to GERD requires that cough nearly or completely disappear with antireflux treat-ment. Utilizing a favorable response to specific antitussive therapy as the “gold standard” test for comparison, and following previously published evidence-based guidelines for interpreting 24-h esophageal pH monitoring and treating GERD in the context of chronic cough, three prospective before-and-after intervention trials,, have revealed the following. Although the standard catheter-based 24-h esophageal pH monitoring has been shown to be the single best test to link GERD and cough in a cause-effect relationship, because it is the most sensitive and specific test, it is important to be aware that conventionally utilized diagnostic indexes of GERD (eg, percentage of time that pH is < 4) can be misleadingly normal and that observing GER-induced coughs can more often be helpful. canadian neighbor pharmacy

Consequently, the sensitivity of the test can depend on how it is interpreted. Until future studies provide better guidelines, it is recommended that the test be interpreted as normal only when conventional indexes for acid reflux are within the normal range and no reflux-induced coughs appear during the monitoring study. For example, in three prospective stud-ies, a cough was considered to be induced by acid reflux only when cough occurred simultaneously with or within 3 min following a drop in pH to < 4. These criteria were empirically established and will need to be validated by future prospective studies. When cough is due to GERD, it should not be expected that there will necessarily be a high percentage of coughs that appear to be induced by GER events in the 24-h esophageal pH tracing. In two prospective, before-and-after intervention trials in which it was determined that chronic cough was due to GERD, GER events in the distal esophagus appeared to induce an average of 29% of the patients’ coughs (range, 0 to 100 coughs) and 35% of the patients’ coughs (range, 0 to 89 coughs). It is also important to stress that the degree of abnormality noted in the esophageal pH-monitoring variables does not directly correlate with the severity of the patients’ cough.